The voice on the other end said, “James?  I have the results of the tests. Your tumor is malignant… you have cancer.”

Contemplating my own mortality and my future on this planet seemed to slap me in the face. My world came crashing down at that moment. “How could that be? I thought to myself.” Cancer is something old, unhealthy people get. I had just turned 31 and I was healthy! I used to play tennis at a high level, I have always been a picture of health; I rarely even get the sniffles!

I was sent to see an Oncologist in Plano, TX that afternoon. The bad news continued. She said I didn’t have much longer if I didn’t get immediate treatment. I would be lying if I said I wasn’t terrified. They admitted me to the hospital that night and immediately everything started heading south. My resting heart rate skyrocketed to 130bpm, my lungs were barely operating at 15% of what is considered “normal”, my kidneys started packing up… it wasn’t fun. Doctors would come in and ask me if I had a written will. When I heard that I couldn’t even come to grips with what they were inferring to. They wanted to fly me down to the specialists at MD Anderson in Houston, but they said I wouldn’t survive the flight. They wanted to do further tests to find out the actual type of cancer I had, but they said I wouldn’t survive anesthesia. In my mind, and in the minds of most men, we are invincible. Hearing them say those things really confused me.

I really don’t remember much from January and February 2019 aside from anguish and fear. I do remember opening my eyes one day in the ICU and seeing my whole family in the hospital room. My parents had flown in from Barbados, my sister and her son had flown in from Canada, and my in-laws had flown in from Michigan to be with us. The outpouring of love and support was overwhelming and certainly helped in my recovery. No one should go through this alone!

I had a non-seminomatous mediastinal germ cell tumor in my chest, which was about 9 inches big. But at this point, they still didn’t know what type of cancer I had, but they said that they were going to make the best guess at trying to treat it and started emergent chemotherapy in the ICU. The protocol was supposed to be bleomycin, etoposide, cisplatin (BEP) but it was decided to hold off on the bleomycin because it increases lung toxicity, and my lungs weren’t strong enough yet.

I can’t thank my doctors enough for guessing correctly, because I immediately started responding to the chemo and was doing well enough to be discharged after Round 1 and sent home for a few days, before being readmitted for Round 2. I can’t express the feelings of joy and elation I felt being “free” for a few days.

My mindset started changing at the start of Round 2, I believe very strongly that what the mind can conceive – the body can achieve. I thought back to the days of my very strenuous tennis training and how that made me more fit, and somehow in my very twisted (and medicated) logic reasoned that fitness was going to cure me faster – or at least increase my physical/mental strength which would allow me to make it through chemo better. I then started doing lunges down the corridors and hallways of the Oncology ward (I was no longer in the ICU.) Word of that quickly made it back to my Oncologist, who put an abrupt end to hallway lunges! Honestly what I had in mind was way crazier than doing lunges, but back then I was carrying around an oxygen tank and an IV pole at all times, so lunges was about as adventurous asI could get. 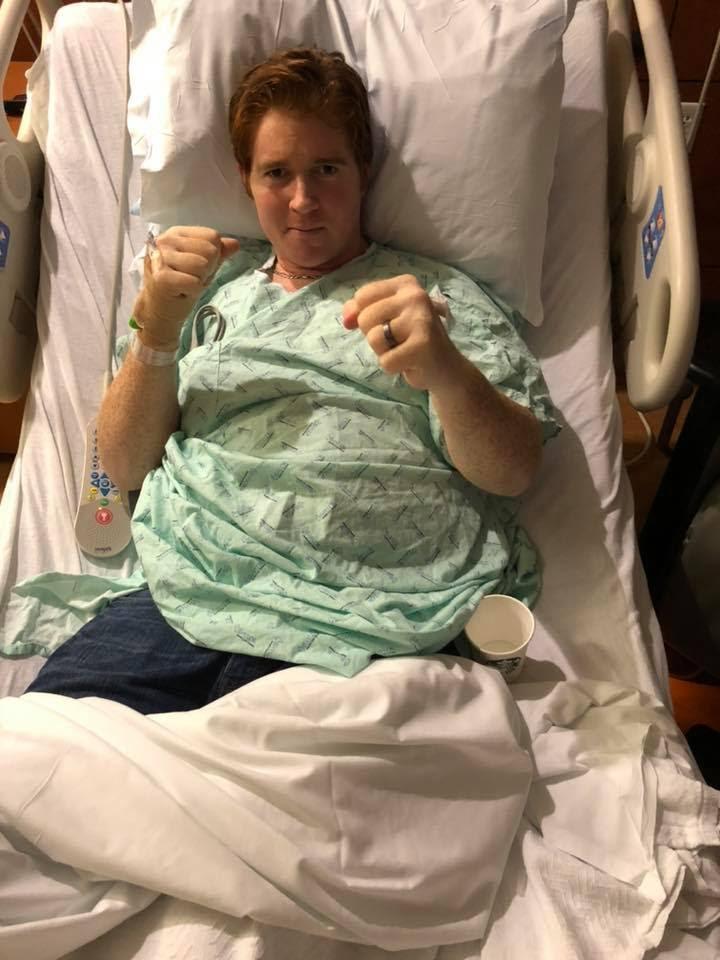 In addition to a positive mindset, and fitness, I believe that a good sense of humor is very important in the healing process. We found every excuse to laugh and make the best out of our situation, and when we ran out of things to do – we resorted to playing tricks on the nurses.

Round 2 went well, and the doctors seemed happy about my progress and they decided to completely discharge me from the hospital and allow me to complete all further rounds as an out-patient. Chemo in general sucks! For the first two and a half days it seems like you’re walking on sunshine and you’re relatively full of energy. Then you get sleepy, and then the sickness starts. It lasts for a few days, but it feels like the worst hangover, food poisoning, motion sickness and flu all combined.

I did rounds 3 and 4 in the Infusion Center at Texas Oncology in Plano. We were very thankful to be on the receiving end of good news. It felt great to hear the doctors say that I should make a full recovery. The imaging studies showed that the tumor was shrinking from 9 inches to around 5 inches. The labs revealed that my Tumor markers (AFP) were plummeting from over 12,000 to now approaching normal ranges. I was almost starting to feel like myself again, despite occasional bouts of sickness. My mom stayed with my wife and me for pretty much for the entire time I was sick. It was humbling to be 31 years old and still need your mom, but I couldn’t have done it without her. She kept the schedule of appointments, cooked our meals, did our washing, and even drove me around when I wasn’t feeling well. 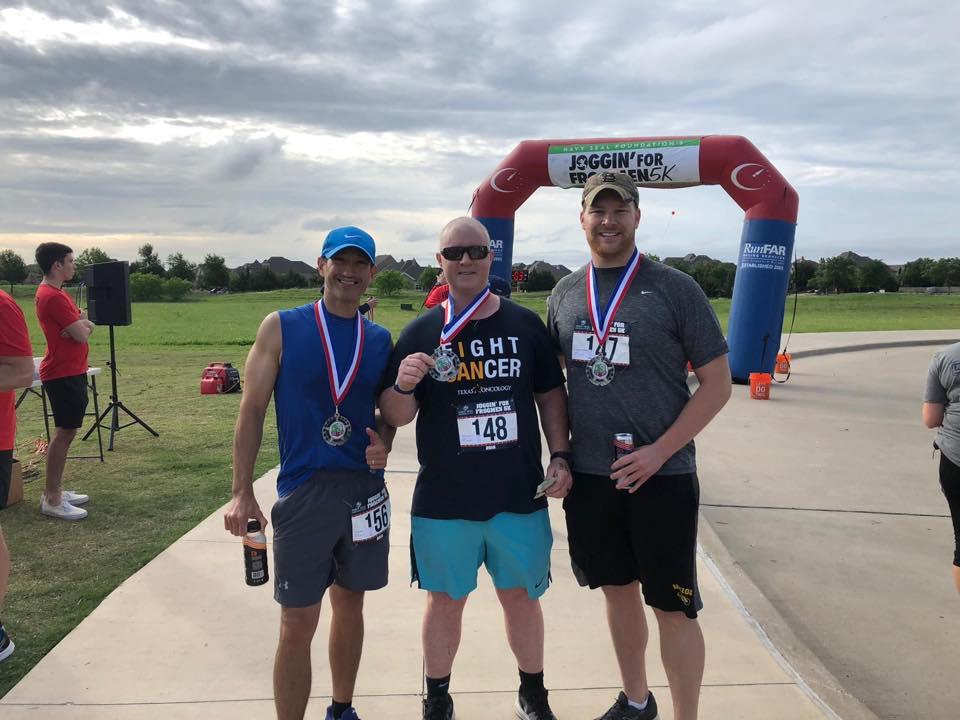 After chemo finished, I was so determined to return back to “normal” that I was looking at every opportunity to prove to myself that I was no longer sick. Torrie, a friend from work invited me to do a 5k race called “Joggin’ for Frogmen” which was being held 15 days after I finished chemo. Back in my athletic days, a decent 5k could be done between 17-19mins, so I was excited to see how close I was to that time even though I hadn’t run all year.

Race day arrived and I was on the front line with a few friends who had come to run with me, and all of the other runners. The gun went off and the race started. I started off sprinting, determined to get a good time. One by one people started passing me, even kids who looked under 10 years old. I pushed until my body ached and my lungs were burning for air. How much longer is this race, I thought to myself. I looked at my watch and it said that we had been going for 3 minutes! After the race, I went home and slept all day. I was pooped, but I finished the race. Official 5k time – 44 minutes.

My fitness kept improving over the next few weeks, I even started playing tennis again. I was eager to return to work at Northwestern Mutual as soon I could, as this was early May and I had been out of work since November. But my short-term memory was shaky at best, possibly as a result of the chemo drugs. So my days were spent at home resting, doing memory/brain games on my phone, working on fitness, and reading. My mom kept telling me to relax and sleep, but I’ve always struggled to sit still for a few hours on road trips and on airplanes, and at that point I had been not doing much for over 6 months. I was ready to be active again, but surgery loomed on the horizon. Chemotherapy had killed the cancer and shrunk the tumor from almost the size of a football to about the size of a softball. I wanted to leave the tumor in there and hopefully, it would’ve melted away, but the doctors wanted to get it out as soon as possible. I wasn’t happy with that because I didn’t like even getting injections, far less having my chest cracked open for them to respect the tumor. 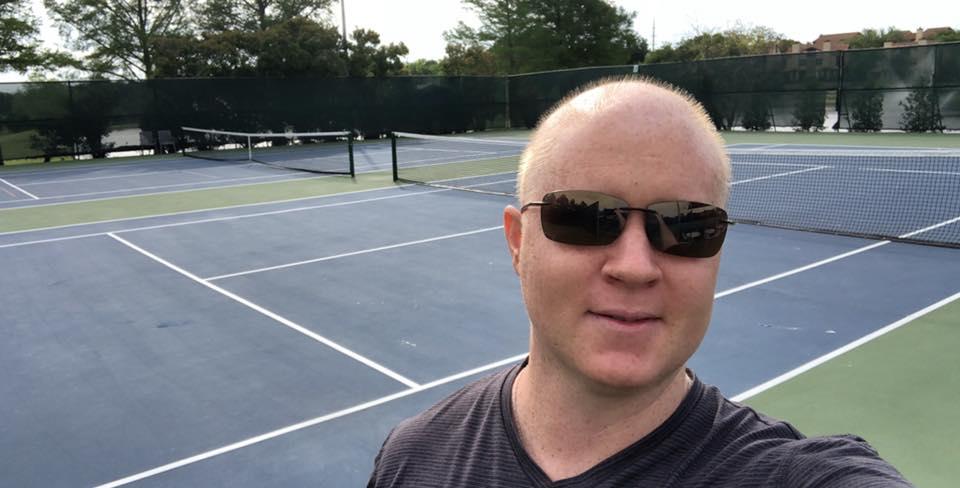 May 20th, 2019 was surgery day. It might have been the most scared I had ever been. It was my first time being under serious anesthesia and they’d essentially be cutting my sternum open. Surgery went as well as it could have gone, with only a few minor complications. I remember waking up in serious pain, but the only thing that outweighed the pain in my chest was that I was so thirsty! I hadn’t had anything to drink in about 18 hours, and I had about 5 or 6 different tubes coming out of me. That brought me all the way back to square one. I went from running a 5k a few weeks prior, to barely being able to walk 100m. However, life is a never-ending series of struggles that we must overcome, and it is about the journey not the destination.

A few days later my cardiothoracic surgeon came in to tell us news about the surgery. He said that they had been able to resect all the tumor, they got all of it, and the pathology report showed that there was no evidence of cancer in it. I was cured! I wanted to burst into tears at that moment, but my wife, mom, and sister were in the room with me. I still had to pretend to be a tough guy.

I want to thank God, my amazing wife, my family, all my doctors and nurses, friends and coworkers for their unyielding love, prayers, and support throughout this time.

I’m honored to be apart of the Smashing Childhood Cancer Committee. Together we will bring home and life to many as we fight for a cure!